The MacLehose Trail is the oldest trail in Hong Kong, 100km long with 200 distance posts. It is named after Sir Murray MacLehose, the 25th Governor of Hong Kong, an enthusiastic hiker who established the Country Parks.

The trail begins in Pak Tam Chung in Sai Kung Country Park, and ends in Tuen Mun in Tai Lam Country Park. It will take you from the east to the west in the New Territories. You will climb up to many hills and peaks, even Hong Kong’s highest mountain Tai Mo Shan!

This is the most varied countryside hike, and it is an amazing trail. It has been named one of the best hikes in the world by the National Geographic Society.

Along the trail, there are many stunning views over the indented coastlines, the peculiar rocks, the sunrise and sunset, and the grand rolling hills. 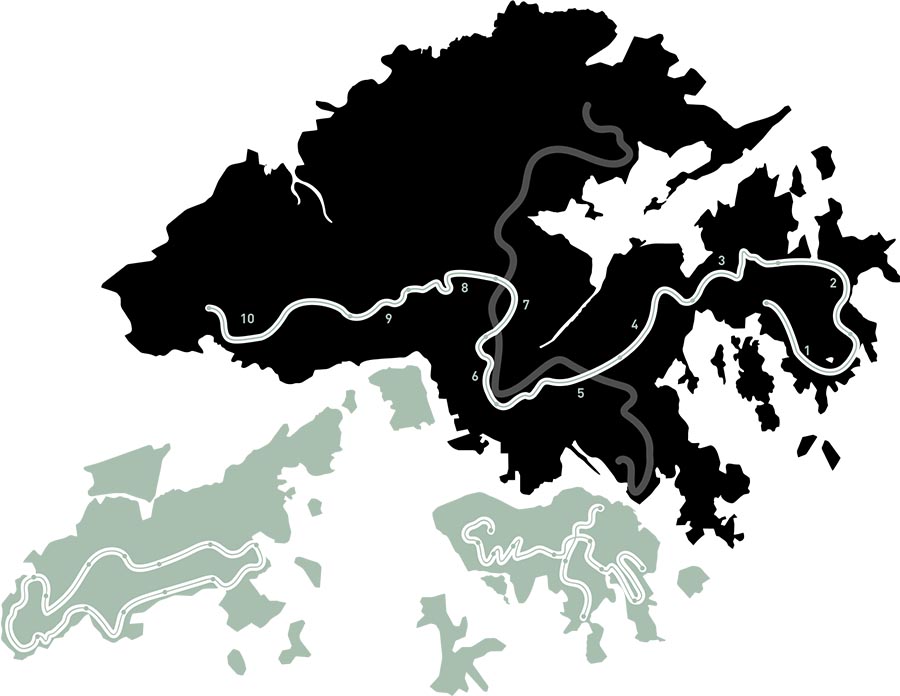 Section 1
Pak Tam Chung → Long Ke
10.6 km
The first section of MacLehose Trail takes you to Sai Kung East Country Park. The trail leads you along High Island Reservoir, the largest reservoir in the territory, this hike is mostly on flat and concrete roads.
Read more
Section 2
Long Ke → Pak Tam Au
13.5 km
Section 2 is quite long but has amazing views. You will pass the Surf School and the natural rock pools before you can take a stop at Ham Tin beach and have lunch. You will finish this section after you walked up the hill to Pak Tam Au
Read more
Section 3
Pak Tam Au → Kei Ling Ha
10.2 km
Section 3 has the most hilly landscape of all 10 sections of MacLehose Trail. You need to climb 3 high peaks and each of them is about 400m hight: Wa Mei Shan, Lui Ta Shek, and Kai Kung Shan.
Read more
Section 4
Kei Ling Ha → Tate's Cairn
12.7 km
Section 4 will blow your mind, it is almost all about Ma on Shan and it is also a very challenging hike but you will have a breathtaking view over the hills so it will be worth it.
Read more
Section 5
Tate's Cairn → Tai Po Road
10.6 km
Section 5 will take you to Lions Rock on the top of this hill you will have an impressive view over Kowloon Peninsula.
Read more
Section 6
Tai Po Road → Shing Mun
4.6 km
This is the shortest section along the trail and a relatively easy walk. It starts and ends very conveniently connected to public transport. Although the trail is short, it is still packed with gorgeous sceneries, war relics and wildlife
Read more
Section 7
Shing Mun → Lead Mine Pass
6.2 km
This is the second shortest section of the trail. It is memorable for its ridgetop views and the two hills, Grassy Hill (647m) and Needle Hill (532m). You will also see an impressive dam at Shing Mun Reservoir.
Read more
Section 8
Lead Mine Pass → Route Twisk
9.7 km
In this section you will have the highest peak of Hong Kong Tai Mo Shan 957m. An excellent trail through a beautiful tropic landscape
Read more
Section 9
Route Twisk → Tin Fu Tsai
6.3 km
Trail runs along the line of hills that separates Tsuen Wan from the Yuen Long-Shek Kong valley, winding through Tai Lam Country Park the second largest Hong Kong Country Park.
Read more
Section 10
Tin Fu Tsai → Tuen Mun
15.6 km
This section of MacLehose Trail is the longest one, it is also considered the easiest one.
Read more

© The Big Four, all rights reserved. Site made by LL Communication Ltd